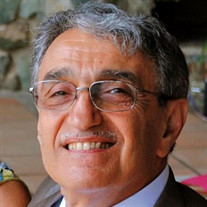 Dr. Ramzi Tufik Assad, 78, entered into rest peacefully surrounded by his family at home in Augusta, GA on Sunday, March 21, 2021 after a year-long battle with non-Hodgkin’s lymphoma. Ramzi was a devoted husband, loving father, and beloved grandfather. A deeply empathetic and passionate man, Ramzi always had time to offer wisdom, unconditional love, and mentorship to the family and friends he cherished in Augusta and beyond. Ramzi was preceded in death by his parents, Tufik and Subhieh Assad, and is survived by his wife of almost 46 years Naila Assad, his sisters Hanan Owayed and Abla Talhami of Shefamer, Israel and their families, his brother Suhail Assad of Haifa, Israel and his family, his daughter Tania Harrick and husband Chris of Orinda, CA and their children Andrew, Lily, and Matthew, his daughter Lina Cates and husband Redding of Washington, DC and their children Dalia and Etta, his son Tufik Assad and wife Kristen of Nashville, TN and their children Aiden and Finley, and countless more family members and friends. Ramzi was born on September 16, 1942 in Nazareth, Palestine and grew up in nearby Haifa. He broke down racial barriers by becoming one of the first Arabs admitted to his medical school in Jerusalem and residency program in Haifa. Ramzi and Naila were married in 1975 and immigrated to the United States. In 1978, they visited and fell in love with the city of Augusta which they have called home for 43 years. Ramzi believed in a life of service and upheld the values of compassion, justice, and peace until the day he died. After teaching for a decade at the Medical College of Georgia, Ramzi started his own Gastroenterology practice and tirelessly served his patients for 28 years before retiring in 2017. He renewed him self spiritually through his involvement at Saint Paul’s Episcopal Church where he served as a vestry member, usher, and member of several committees. He strengthened his faith and put it into action by becoming an active participant in the Education for Ministry program. A lifelong learner and lover of life, Ramzi was an avid reader and traveler with an insatiable curiosity for different people and their cultures. Music played an integral role in his life, from setting the tone during festive family occasions to providing comfort during his final days. In retirement, Ramzi joined a progressive book club, wrote a memoir, and audited a creative writing class at Augusta University. For one of his assignments, he translated a poem called “To My Mother” by Mahmoud Darwish, a Palestinian poet and old friend. This is the final stanza. I’m old give me back my childhood stars and I will join the young sparrows in their journey to your waiting nest. Graveside services will be held on Saturday, March 27, 2021 at 2:00 P.M. at Westover Memorial Park with Rev. Joe Bowden and Rev. George Muir officiating. Due to concern for public health during the COVID-19 pandemic, the family requests that social distancing and other safety precautions be followed. Face masks are required. In lieu of flowers, please consider making a donation to the Georgia Cancer Center at Augusta University at https://www.augusta.edu/giving/gacancercenter.php or to St. Paul’s Episcopal Church at https://www.saintpauls.org/giving/. Thomas Poteet & Son Funeral Directors, 214 Davis Rd., Augusta, GA 30907 (706) 364-8484. Please sign the guestbook at www.thomaspoteet.com

Dr. Ramzi Tufik Assad, 78, entered into rest peacefully surrounded by his family at home in Augusta, GA on Sunday, March 21, 2021 after a year-long battle with non-Hodgkin&#8217;s lymphoma. Ramzi was a devoted husband, loving father, and beloved... View Obituary & Service Information

The family of Dr. Ramzi Tufik Assad created this Life Tributes page to make it easy to share your memories.

Send flowers to the Assad family.