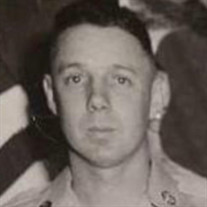 Raymond Gavin Dunham (July 26, 1931 - April 19, 2021) Born in Lucedale Mississippi to Richard J. Dunham and Lela Havard Dunham, the youngest of seven siblings, all of whom have preceded him in passing. He was very much loved by his siblings and their families as a very caring and giving "Uncle Ray". He was born and raised on the family farm. At the young age of 17, he left home and enlisted in the National Guard in 1948 with his brothers, Herman Dunham and Norman Dunham. In 1950, Ray enlisted in the US Army Corps to begin a 22-year military career that included a tour in Korea during the Korean War and a tour in Vietnam. Between the wars, Ray served three tours of duty in Germany as the Mess Chef and was well-known for his Thanksgiving and Christmas celebration dinners for all the soldiers serving on his base. His love of holiday cooking, as well as his love of hunting, fishing and boating was passed to many of his children and grandchildren. Raymond Gavin Dunham is survived by his children: Kathleen (Don) Bridges, Linda Parenti, Cynthia (Michael) Johnson, Raymond (Leslie) Gavin Dunham, JR., Laura (Mike) Johnson and their mother, Helen Dunham who resides in Grovetown, GA. Annette (Brett) Page, whose mother Catherine Holy, preceded him in his passing. Grandchildren: Brandy (Justin) Quarles, Josh (Katie) Guyton, Christina Smith, Kelsey (Justin) O’Neal, Amy (Allen) Stribling, Andrew Bridges, Benjamin Johnson, Matthew Bridges, Sarah Bridges, Daniel Johnson, Emily Johnson, Brandon (Desirae) Munson and Casey Dunham. Great Grandchildren: Harleigh, Jimmy, Braedyn, Stella, Ember, Rion, Max, Wyatt, Olivia, Hadley, Oliver and Oscar-due in July. A Graveside memorial will be held on Friday, April 23, 2021 at 2:00 P.M. at Bellevue Memorial Gardens, Grovetown. Viewing will be held Friday, April 23, 2021 prior to the service from 1:00 until 1:30 P.M. at Thomas Poteet & Son Funeral Directors, 214 Davis Rd., Augusta, GA 30907 (706) 364-8484. Please sign the guestbook at www.thomaspoteet.com

Raymond Gavin Dunham (July 26, 1931 - April 19, 2021) Born in Lucedale Mississippi to Richard J. Dunham and Lela Havard Dunham, the youngest of seven siblings, all of whom have preceded him in passing. He was very much loved by his siblings... View Obituary & Service Information

The family of Raymond G. Dunham created this Life Tributes page to make it easy to share your memories.

Send flowers to the Dunham family.