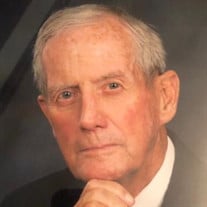 Richard E. Hartney, age 96, died May 28, 2021. He was born in Chicago, Illinois on August 13, 1924, the son of Edgar J. Hartney and Marcella Smith Hartney. He was the oldest of four sons. In 1943 at the age of eighteen he enlisted in the U.S. Army, eventually going to Camp Gordon in Augusta, GA for training. While there he met Marguerite Bowen at a USO dance. Shortly before he shipped out to the European theater of World War II in 1944, he and Marguerite were married, “with $27 dollars and a three-day pass.” He served with the 87th Infantry Division in the Ardennes. After the war he returned to Augusta, eventually being employed by J. B. White’s department store, where he worked for forty-five years until his retirement. He was married to Marguerite for forty-five years, until her death in 1989. They had two sons, Richard E. Hartney, Jr. and James Barrett Hartney. He married Esther McQueen in 1990, and lived with her in Augusta until her death in 2012. Through his marriage to Marguerite he is survived by his sons, five grandchildren and nine great-grandchildren. Through his marriage to Esther he is survived by her two sons and four grandchildren. For the last nine years of his life he enjoyed the friends, fellowship and independent living at Washington Commons in Evans. He was a member of Trinity on the Hill Methodist Church for seventy years. He taught his sons to play golf, a game he enjoyed playing until age ninety. When he could no longer play, he would drive the cart and keep score. Most significantly, he modeled to his family the importance of faith, faithfulness, diligence, honesty and kindness. It is remarkable how often people would describe him as being such a kind, gentle man. The last person to see him alive was his nurse Lydia. She said that as she turned out the light to leave his room, he called out, “Thank you, Nurse, I love you.” He passed away shortly afterwards in his sleep. Memorial and tribute services are provided by Thomas Poteet and Sons on Davis Rd. A memorial service and celebration of his life will be scheduled for a later time. Thomas Poteet & Son Funeral Directors, 214 Davis Rd., Augusta, GA 30907 (706) 364-8484. Please sign the guestbook at www.thomaspoteet.com

The family of Richard E. Hartney created this Life Tributes page to make it easy to share your memories.

Send flowers to the Hartney family.