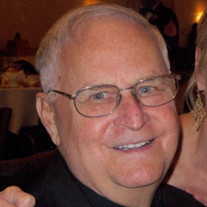 Mr. Richard "Dick" Machovec, 90, went to be with the Lord on Tuesday, February 16, 2021. He was known by many different names, but most affectionately, “Papa”. He was born in Berwyn, Illinois on May 12, 1930, the only child to Arthur and Florence Machovec. Growing up he loved outdoor activities and sports, particularly basketball. In his young teen years, he attended church with a classmate and his family. They shared the gospel message of John 3:16 with him and he accepted Christ as his Savior. Papa was an amazing patriot, even raising money as a young boy for WWII supplies. This patriotism led him to enlist in the US Marine Corps at the age of 18. There, he served our country for 24 years with tours in both Korea and Vietnam. He was often commended for his exemplary performance as a soldier. The Marine Corps was truly his second family. It was during these years that he met the love of his life, Annie Mae Page. They were married April 11,1953 in New York City. During the next five years their 3 children, Kim, Mary Jo, and David were born. The Marine Corps life afforded them to move and live in many wonderful places. Upon retirement from the Marine Corps, Papa continued his education and obtained a Master's in Education from Armstrong College in 1973. In 1975, “Mr. Mac” became the Headmaster of Augusta Christian School where he served the teachers and students for 7 years. He often referred to this time as some of the happiest years of his life. Students and teachers alike have shared with the family what an amazing impact he left on their lives, both educationally and spiritually. After his time in education, he worked in outdoor advertising until his retirement. Papa spent his retirement years attending many of his grandchildren's sporting events, theatrical programs and most importantly sharing the gospel to those who did not have a personal relationship with the Lord. Papa lived life to the fullest. He never met a stranger and lived his ‘life verse’ out loud. “For I am not ashamed of the gospel of Christ: for it is the power of God unto salvation to everyone that believeth; to the Jew first and also to the Greek.” Romans 1:16 Family members include his son: David Machovec (Jill) of Lawrenceville, GA; daughter: Kimberly M. Rogers (Steve) of North Augusta, SC; grandchildren: Rebekah, Ashley, Sarah, Steven, Israel, Eve, Matthew, Christian, Leah, Anna, Rachel, and Rebekah; and 13 great grandchildren. Papa was predeceased by his wife, Ann Page Machovec and daughter, Mary Jo Croft. A private service for the family will be held. Our family would love for you to honor our Papa at a public celebration of life, which will be held at Augusta Christian School, on March 28, 2021 at 3pm. In Lieu of flowers, please make charitable contributions in remembrance of Mr. Richard Machovec to Augusta Christian School, 313 Baston Road, Martinez, Ga 30907. The family would like to thank the numerous people who were part of Papa's life in his later years. Your ministry to him did not go unnoticed. SEMPER FI. Thomas Poteet & Son Funeral Directors, 214 David Rd., Augusta, GA 30907 (706) 364-8484. Please sign the guestbook at www.thomaspoteet.com

The family of Richard "Dick" Machovec created this Life Tributes page to make it easy to share your memories.

Send flowers to the Machovec family.