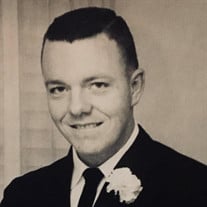 Augusta, GA – Mr. Robert Clinton Shelton, Jr. passed peacefully in his sleep Tuesday, February 1, 2022, in his loving home with his wife of nearly 34 years, Susan, by his side. He was surrounded by life’s trinkets that are born from the heart and hung from the walls. There are clocks, plates, a box containing his amazing dog and his best ever buddy, Bear’s, ashes, and pictures of ancestors never forgotten, and descendants now left behind. All told a story of a man and his family, and the love they shared. Bob was a big bear of a man. Large in stature and even larger in heart. Bob was the first son, born December 30, 1942, to Robert Clinton Shelton and Margurie Morris Shelton. He leaves behind a family consisting of his wife: Susan Honea Shelton of the home; daughter: Frances Margurie Shelton (Keith); son: Robert C. Shelton, III (Melissa); eight grandchildren: Jessica Farrell (Josh), Cory Jarrell, Tyler Jarrell, Amanda Smith (Dewey), Evan Holder (Jordan), Luke Shelton, Angelina Shelton and Seth Shelton; nine great grandchildren: Emmaline, Samson, Eliza, and Stella Farrell, Allison Smith Easton, Hadley, Clara, and Addison Holder. He was predeceased by his parents and oldest child, Debra Anne Shelton. Bob is also survived by his one incredible brother: Michael Lee Shelton and sister-in-law: Karen; two nieces: Tamara and Kathryn and one nephew: Chris and his wife Soniya and his great nephew and favorite Paw Patrol watching partner, Ian (Peanut). Bob was an Augusta native. He graduated from Richmond Academy in 1960. He started his career with Greyhound and was active in the intercity bus transportation system for 48 years. Prior to his retirement in 2008, he was station manager of the Southeastern Stages Augusta station for 22 years. After his retirement, Bob remained active with his wife, Susan’s management of the Southeastern Stages Fort Gordon station until her retirement in 2017. Bob was a lifelong Republican and routinely had his TV set to Fox News. He loved his country and the opportunities and freedoms it afforded. He was firm in his opinions and could and would offer effective arguments to substantiate his convictions. Bob was a humble man that never sought attention. He wanted to live his life simply, without regrets or complications. He may not have seen as much of the world as he wanted, but what he saw and what he had, he loved. It is now up to the rest of us that were touched by him, to carry his memory forward. To do the things he did not yet accomplish, and by doing so, he will never truly be gone, but forever be in our hearts. We love you Bob, Daddy, Pop, Granddaddy, Bubba and “Runkle” Bob. (Author: Nephew, Christopher Lee Shelton) The family will receive friends Saturday, February 5, 2022 from 5:00 until 7:00 P.M. at Thomas Poteet & Son Funeral Directors, 214 Davis Rd., Augusta, GA 30907 (706) 364-8484. Please sign the guestbook at www.thomaspoteet.com

Augusta, GA &#8211; Mr. Robert Clinton Shelton, Jr. passed peacefully in his sleep Tuesday, February 1, 2022, in his loving home with his wife of nearly 34 years, Susan, by his side. He was surrounded by life&#8217;s trinkets that are born from... View Obituary & Service Information

The family of Robert Clinton Shelton, Jr. created this Life Tributes page to make it easy to share your memories.

Send flowers to the Shelton, family.