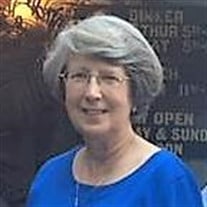 Susan Elizabeth Craig was called to heaven on December 29, 2021, after four courageous battles with cancer. She was a native of Augusta, born on October 9, 1949, to Richard Z. and Betty Byrd Craig, she earned Bachelor’s, Master’s, and Specialist Degrees in Mathematics Education from Augusta College. She retired after 41 years of service teaching Mathematics at Lucy Laney High, Glenn Hills High, and Davidson Fine Arts Schools. Her teaching career included several years as Mathematics curriculum planner for the Richmond County Board of Education. During her career, she was named 1986 Richmond County Teacher of the Year. She was awarded the Georgia 1985 Presidential Award for Excellence in Mathematics Education, presented to her by President Ronald Reagan at a luncheon in the White House Rose Garden. She is survived by her siblings, Richard Z. Craig, Jr. (Maureen May Craig), Daniel J. Craig (Crystal Holt Craig), Catherine Craig Folger (Billy Jennings Folger) and Roland Gardner Craig (Christel Sundin Craig). She was “Aunt Dee Dee” to her nieces and nephews - Martha Craig Robertson (Heard), Jenni Folger Greenleaf (Deanna), Richard Z. Craig III (Islen), Janie Craig Osbourn (Samuel), Rebecca Folger, Craig Folger (Katelyn), Emily Craig Drew (Jim) and Susan Downen Yarbrough (David). She was blessed with many grand-nieces and nephews as well as godchildren. Besides her parents, she was predeceased by her much-beloved niece, Sarah Anne Craig, for whom she helped to provide loving care for many years. She attended Sacred Heart Elementary and Aquinas High Schools (Class of 1967). A member of Most Holy Trinity Catholic Church where she was a Lector, she also served on the parish council and on the Immaculate Conception School Board. She was a volunteer at Catholic Social Services. She previously taught Religious Education at Sacred Heart and St. Teresa of Avila Catholic Churches. She was a lifelong Girl Scout and was recognized for lifelong service to scouting with the Gold Curved Bar Award. She served on the GA-Carolina Girl Scout Council Board. She was a certified Master Gardener, an excellent cook, and left special memories for her nieces and nephews who she taught to cultivate and marvel at the miracle of God’s gift of life - from seed to table. A funeral Mass, concelebrated by Fathers John Lyons, Jacob Almeter, and Mark Ross, will be offered at 10:00 AM on Friday, December 31, 2021, at Most Holy Trinity Catholic Church, followed by interment at Westover Memorial Park. The Holy Rosary will be prayed at 6:00 PM on Thursday, December 30, 2021, at the chapel of Thomas Poteet & Son Funeral Directors, 214 Davis Road, Augusta, Georgia, followed by visitation. Memorial contributions, if desired can be made to Most Holy Trinity Catholic Church, Catholic Social Services, or the charity of your choice.

Susan Elizabeth Craig was called to heaven on December 29, 2021, after four courageous battles with cancer. She was a native of Augusta, born on October 9, 1949, to Richard Z. and Betty Byrd Craig, she earned Bachelor&#8217;s, Master&#8217;s,... View Obituary & Service Information

The family of Susan Elizabeth Craig created this Life Tributes page to make it easy to share your memories.

Send flowers to the Craig family.