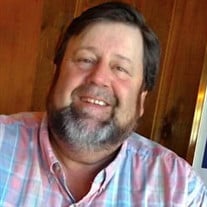 Thomas Porter Fleming III, “Porter” died Wednesday, October 20, 2021 from Covid related complications. Porter was born in Bethesda, Maryland October 24, 1960 where his father William Henry Fleming II was a Resident at the Naval Hospital. A graveside service celebrating Porter’s life will be held at Summerville Cemetery on Wednesday October 27, at 11:00 AM. Known for his lively personality and quick wit, Porter was a man of many interests, talents, and accomplishments. From childhood, Porter loved to play with Tonka trucks which developed into a passion for landscaping and his business, Landscape Contractors. Porter was creative and developed numerous business ventures. He was self-taught and could fix just about anything. Those who met Porter rarely forgot Porter. He was loved and respected by many people. Porter was well known for the fun times at his lake house. He was a great cook, a talent learned from his mother Martha Boardman Fleming. If Porter was there, there was a party! Fun on the lake, with plates full of BBQ, topped with his famous Southern Q sauce while watching the sun set around the firepit will bring back happy memories for many. Porter loved to be outside hunting, fishing, watching for eagles and wildlife. He appreciated nature, especially the cold spring water at his grandfather’s garden in Bath, GA. Though not mentioned often, Porter had a deep sense of a power greater than himself which he saw evidenced in nature. Porter loved his time being with evidence of that power, either at the coast or from his deck on the log cabin he built. The love of Porter’s life was his daughter, Catherine Elizabeth Fleming, “Elizabeth.” Porter and Elizabeth had many adventures including early morning fishing trips, camping, and a hunting trip that was cut short due to Elizabeth’s perfume, which is not known to be an asset when hunting! Porter is predeceased by his father, William Henry Fleming II, his brother, William Henry Fleming III and his mother Martha Boardman Fleming. He is survived by his daughter, Catherine Elizabeth Fleming, “Elizabeth”; his sister Catherine Boardman Fleming “Sweetie B” his aunt and uncle, Lamar and Sally Fleming, and aunt Florrie Hart Corley and numerous Fleming and Boardman cousins. A special thank you is extended to Katie Moncrief and Mike Ingalls who provided empathetic and expert care to Porter at Augusta University Medical Center. A heartfelt thank you goes to the many, many people who prayed for Porter and his family and friends. Your support and generosity of time given to prayer will never be forgotten. Porter was a Patriot and appreciated the freedom offered in this country. Porter and the family request that memorials be sent to the Wounded Warriors Project for those who gave so much to protect this country. The address is PO Box 758516 Topeka, Kansas 66675-8516. Thomas Poteet & Son Funeral Directors, 214 Davis Rd., Augusta, GA 30907 (706) 364-8484. Please sign the guestbook at www.thomaspoteet.com

The family of Thomas Porter Fleming III created this Life Tributes page to make it easy to share your memories.

Send flowers to the Fleming family.