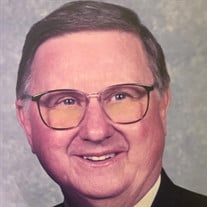 Whitson “Bill” Carter Augusta, GA - Whitson Albert "Bill" Carter, 86, loving husband 56 years to Mildred “Millie” Carter - was ushered into the presence of our Lord —being received into Glory on the occasion of "Good Friday"... April 2, 2021 at his home in Martinez. "It Just So Happened" Born November 13, 1934 in Stanley County, North Carolina, Bill grew up in-&-around a home and vocational environment of "necessitated" innovation, ingenuity, and meager family-&-self reliance that fostered an inclination towards mechanical dexterity and deductive analysis which were instrumental in moving to Augusta in 1951. After successive service and managerial positions within various General Motors organizations and dealerships, Bill transitioned into the field of education and instruction as a professor in the University System of Georgia. This proved to ultimately be the "calling" that would weave his gifting of technical understanding and application together —with his engaging affinity for people— into the daily experience of both facilitating and fulfilling the "becoming" of their own "agency"— just as he, himself, had "become" in the fulfillment of them... because, as he would say to every new Class, "You've got to learn a 'sellable skill'— of making yourself valuable in any field." Upon Augusta Technical College's expansion of their program involving Automotive Technology of Mechanical Engineering & Electrical systems, the department faculty garnered national attention being selected by the United States Department of Education as the recipient of the US Secretary's "Award for Outstanding Vocational Education Program"..."exemplifying the highest standards and principles of quality occupational education"…"with pride, honor, and prestige" nationwide in 1985 with recognition by President Ronald Reagan. Maintaining a capacity both on the ATC Faculty Board— and teaching in the program, Bill served until his retirement in 1998 ….and (as remarked at the retirement banquet), "...always with a smile." Among other giftings of personal interest in-&-throughout the times of life, Bill enjoyed roller skating, water skiing, and guitar playing (or rather - "pickin’"). Whether working at the skating rink ("officiating")... trick skiing (with hats and sunglasses)... or guitar pickin' (at the local spot) —he involved enjoying others in the art of charm. Until one day in 1962, it "just so happened" that Bill met a "little girl" named Mildred and ended up taking her out in the boat because— luckily, another couple "just so happened" to be able to go too! ...which set-up the ol' "motor-outta-gas" joke (Oh, no!! —??).... But the real joke was on him in not getting to see her for another whole year because "it just so happened", she was too young and had to wait until that time was up! But God has a "way" with time —and since He declares "the end from the beginning"— by that time, "it just so happened" to bring them into tandem. So on January 2, 1965, Bill and Mildred synchronized their lives in a time of matrimony, and —then by "becoming" Billy and Millie— God was aligning their next appointment. Since His "way" with time necessarily entails distance (space) - interdependently - this next appointment suddenly changed "their space" after a slow passing of time. But from here, by the Providence of God, "all things become new". The autonomy of new identity is essential in the reorienting of "becoming" —just as reiterating is to fortifying— and, becoming fortifying is the essence of being loving that is found only above that which is past (Col 3) because renewing love is lifting the other by the first becoming last (Mark 9). In 1970, a new General Motors opportunity brought Bill to Aiken, SC from Evans, GA while Millie remained at Babcock and Wilcox thereby necessitating a new home between Aiken and Augusta— and "it just so happened" that during a home inquiry involving housewares, it pleased God as the vehicle of bringing the Gospel in renewing of the mind and reorienting their heart in yet, another "new becoming" of an already loving Billy and Millie. As time was accompanying Billy and Millie— in the fulfilling of enjoying... who they were becoming, "it just so happened" that all the same giftings which were fulfilling for him… were enjoyable for her —in the becoming of them. Whether skiing, swimming, or skating —enjoying the fulfilling of their giftings— was who they were becoming. Some 10 years later in 1980, "it just so happened" that Millie "found out" about a teaching position becoming available and encouraged Bill to go and see the people at (what was then) Augusta Technical Institute about a burgeoning program in automotive engineering that might be a more fulfilling career... And as such it…"just so happened"... A God-ordained marriage is His way of being and becoming the fulfillment of what "just so happens" to be what He declares, and in this fulfillment, Bill would often (emotionally) reflect back on God's hand in giving Bill new life and the gifts He brought into it —through his Lord and Savior Jesus Christ. Bill was predeceased by… † Son, Whitson "Whit" Albert Carter Jr. (surviving wife) Diane, (daughter) Christen ... And † Brother John T Carter surviving nephews, Mitchell Carter Jeff Carter † Sister Georgie Mae Penaranda (niece) Maria P Faulkner Bill is survived by.... † His Wife Mildred L Carter † Daughter Carol Cole (Marty) (her son) Jason Burns (grandson) Jonathan Brister (great-grandson) Grayson Brister † Son Roy Scott Carter (grandson) Jonathan Junod † Brother Paul L. Carter (niece) Susan R. Newman (Derrell) (niece) Tamela The funeral service will be held Wednesday, April 14, 2021 at 2:00 P.M. in the chapel of Thomas Poteet & Son with Rev. Barry Clanton officiating. Burial will follow in Bellevue Memorial Gardens. The family will receive friends one hour prior to the service, beginning at 1:00 P.M., at Thomas Poteet & Son Funeral Directors, 214 Davis Rd., Augusta, GA 30907 (706) 364-8484. Please sign the guestbook at www.thomaspoteet.com

The family of Whitson "Bill" Carter created this Life Tributes page to make it easy to share your memories.

Send flowers to the Carter family.