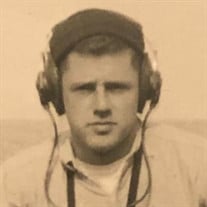 Augusta, GA – William Joseph Salley “Bill”, 83, died peacefully in the early evening hours of Thursday, June 9, 2022 surrounded by his loving family. Bill was born January 13, 1939, in Augusta, GA to the late William Howell Salley and Idys Leroy Salley. He was a graduate of the Academy of Richmond County and the University of Georgia where he was a member of the Kappa Alpha order. He proudly served in the United States Navy from 1962-1964. Bill worked for the City of Augusta for many years and retired in January of 2013. Most notably he was Director of Personnel from 1967 to 1974. Bill was an avid outdoorsman who loved spending time chopping wood and planting in his garden. Affectionately known as “Pop” to his family, he was always an active and loving father, grandfather and great grandfather. His family was his most prized accomplishment, and spending time with them was his favorite pastime. A close second was his time spent watching the Georgia Bulldogs. As a passionate Dawg fan, he gratefully lived to see them drive to victory in the 2021 season’s National Championship game. He loved being with his family in Athens on game day and was indeed a damn good Dawg. Bill was a member of Trinity on the Hill United Methodist Church where he was a faithful member of the ACS Sunday school class for over 30 years. He was a former president of the Lions Club. And he was a proud and dedicated blood donor and was recognized for his significant contributions as a member of Galloneer Program. Bill is survived in death by his three children William H. Salley (Alice), John Joseph Salley (Tara) and Anna Salley Wilson (Tripp), his seven grandchildren William Joseph Salley II (Sallie), Margaret Adeline Salley, Anna Salley Wilson, James Thomas Wilson IV, John Joseph Salley, Jr., Bentley Jones Salley and Charles Porter Salley, and his two great granddaughters Alice Chilton Salley and Frances Catherine Salley and his children’s mother Sandra Salley Allen. He was preceded in death by his sister Carolan Salley Vickers. Graveside services will be held at 10:00 a.m. on Monday, June 13, 2022 at Westover Memorial Park. Reverend Brandi Casto Waters will be officiating. Honorary pallbearers will be William Joseph Salley, II, Margaret Adeline Salley, Anna Salley Wilson, James Thomas Wilson, IV, John Joseph Salley, Charles Porter Salley, Bentley Jones Salley, Alice Chilton Salley and Frances Catherine Salley. Friends and family are invited to gather at the home of Anna and Tripp Wilson, 2206 Gardner Street, Augusta, GA on Sunday, June 12, 2022 from 5:00 to 7:00 P.M. In lieu of flowers, donations can be made in his memory to Shepherd Community Blood Center, P.O. Box 1189, Evans, GA, 30809. Thomas Poteet & Son Funeral Directors, 214 Davis Rd., Augusta, GA 30907 (706) 364-8484. Please sign the guestbook at www.thomaspoteet.com

The family of William "Bill" J. Salley created this Life Tributes page to make it easy to share your memories.

Send flowers to the Salley family.