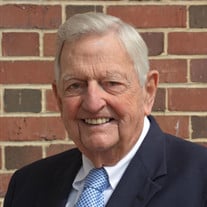 Augusta, GA – Mr. William Lawrence McCrary, III better known as “Larry”, peacefully entered into rest at his home on Thursday, March 3, 2022, after a brief but arduous battle with lung cancer. Larry was born in Augusta on May 19, 1933 and lived most of his life here. He attended William Robinson Grade School and the Academy of Richmond County (ARC) High School. Larry was a lifelong avid fan and accomplished player of the game of golf and also loved hunting, saltwater fishing, and watching the Georgia Bulldogs. He was the No. 1 player on ARC’s golf team for three years in a row in 1949, 1950 and 1951 leading his team to regional titles in 1950 and 1951, and a state championship his senior year in 1951. Following high school, Larry spent two years at The Citadel in Charleston, South Carolina from 1951 to 1953 before the army told him it was time to serve his country. He then served two years of active duty in the Army from 1953 to 1955 and was stationed at Fort Jackson in Columbia, South Carolina followed by Fort Gordon (then known as Camp Gordon) in Augusta, Georgia. Larry served as an MP and a clerk; however, he was also called upon to host numerous generals and other high-ranking officers on the links who frequently came to Augusta in search of a little rest and recreation. After an honorable discharge from active duty in 1955, Larry returned to college and spent one year attending the University of Georgia where he pledged Sigma Alpha Epsilon Fraternity. In 1956 Larry returned to Augusta and went to work with his father at Phoenix Oil Company, a business started by his grandfather in 1917. He then started his own business, McCrary Oil Company, in the early sixties and served as owner/president until 1973 when the company was merged with Phoenix Oil Company upon the death of his father. He served as president of Phoenix Oil Company until 1986 when he sold the company and retired. As previously mentioned, Larry was a very skilled golfer and a scratch player during his younger years. He won the Augusta City Junior Amateur 3 years in a row in 1949, 1950, and 1951, and was runner-up in the Georgia State Junior Amateur and semifinalist in the Georgia State Amateur, both in 1952. Several years later at the age of 25, he even decided to try his hand on the professional tour, and in 1958 he competed as an amateur in three PGA sanctioned tournament. He also won the Augusta Country Club Championship twice and was the Men’s Club Champion in 1958 and 1962. Larry was always known for his mastery of putting and chipping and was even given the nickname “The Wizard” for his skill on and around the green. He wasn’t bad off the tee either, as is evidenced by his record of having made a total of fourteen (14) hole-in-ones over his lifetime. Larry was a life-long member of St. Paul’s Church and the Augusta Country Club, member emeritus of the Augusta Golf Association, and member of the Walmart Golf Group, the Augusta Kiwanis Club, and a founding member of Sage Valley Golf Club. He was also a former member of the Augusta Assembly, the Augusta Heritage Club, Augusta National Golf Club, Cuscowilla Golf Club, and founding member of Mt. Vintage Golf Club. Over the years, he had the privilege of serving on the board of directors of SunTrust Bank (previously First National Bank and Trust Company of Augusta) and Walton Rehabilitation Center. Larry is predeceased by his parents, William L. McCrary, Jr. and Elizabeth Wallace McCrary, better known as Pete and Betty; his paternal grandparents William L. McCrary, Sr. and Carrie Stockton McCrary; his maternal grandparents Fielding Wallace and Anita Phinizy Wallace; and son Robert Louis McCrary. He is survived by his loving wife of 62 years, Nell Henry McCrary; son Fielding Wallace McCrary and wife Brenda; and two granddaughters, Elizabeth McCrary and Julianne McCrary. Funeral services will be held at 2:00pm on Friday, March 11, 2022 at St. Paul’s Church immediately followed by interment at Westover Memorial Park. Pallbearers will be Phil Harison, Vaughn Maxwell, Fred Sims, Charles Dolan, Levi Hill, Robert Moody, Rick Rhoden, and Lee Prather. Honorary pallbearers will be Louis Walker, Edo Douglass, Billy Morris, Ed Moody, Carl Darby, Brad Bennett, Roy Simkins, Fleming Norvell, Haley Roberts, John Rushing, and members of the Augusta Golf Association and the Walmart Golf Group. In lieu of flowers, memorials may be made to Christ Community Health, P.O. Box 2344, Augusta, GA 30903; or The CSRA Humane Society (https://csra-hs.com/page/donate). Thomas Poteet & Son Funeral Directors, 214 Davis Rd., Augusta, GA 30907 (706) 364-8484. Please sign the guestbook at www.thomaspoteet.com

The family of William "Larry" McCrary III created this Life Tributes page to make it easy to share your memories.

Send flowers to the McCrary family.