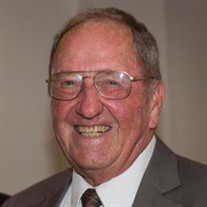 Augusta, GA – William Harold Moon, 89, entered into rest Wednesday, December 30, 2020. Harold Moon was born to John L. and Elizabeth Moon in Columbus, Georgia, in 1931 on a dairy farm where he hand-milked cows twice a day and performed all the other tasks required on a family farm. He chose not to engage in the life of a dairy farmer, instead pursuing higher education at Georgia Southwestern College. He put his education on hold to serve his country in the Army during the Korean War. Afterwards he earned a master’s degree in psychology from Auburn University, followed by a PhD in clinical psychology from Florida State University. He then returned to Auburn for seven years as a teaching faculty member before being hired in late 1971 to head the Department of Psychology at Augusta College. He advanced to upper administrative roles, helping to start the college’s first full-time graduate program, a Master of Science in Psychology. Before retiring in 1996 as a Professor Emeritus of Psychology, he was presented with the Richard S. Wallace Distinguished Service Award for his service to Augusta University, its students, and the community. Harold was well known and respected within his chosen discipline. For example, he served as President of the Southeastern Psychological Association, President of the Psi Chi National Honor Society in Psychology and was named a Fellow of the American Psychological Society. Throughout his career and in retirement, Harold was a champion for those adversely affected by emotional, cognitive, and other psychological issues. In the 1970s, Harold was among the local leaders who helped establish a community mental health center in Augusta, then the largest city in the country without one. For many years, he served on the advisory boards for both the Community Mental Health Center and the East Central Regional Hospital. Harold was also a founding and long-serving member of the Bert Yancey Mental Health Golf Tournament which, for 27 years, has continued its mission to benefit local mental health advocacy organizations such as Mental Health America, National Alliance on Mental Illness, and the Depression and Bipolar Support Alliance. Harold was a longtime member of North Augusta Country Club and served on its Board of Directors as well. He later joined the River Golf Club where he was known for his love of the game of golf. His swing was unique and legendary. Despite an unorthodox setup, suggestive contortions and (eventually) his swing, he somehow managed to hit the ball. Most of the time. Somewhere. If you played golf with Harold Moon, you had a friend for life. He was preceded in death by his wife of 54 years Kay Moon, who supported him through his higher education and faculty career. They loved to travel and attend the many charitable social events which they generously supported. He found love again at the age of 82 and married Carolyn Benning who brought much joy to his life. He is survived by his wife Carolyn, sister Betty Woodruff, son Brian Moon (Molly), daughter Alison Shorter (Robert), and stepchildren Kerry Benning Doyle (Tim), Douglass Benning (Rochelle), and Ashley Benning (Bob Kasenchak). He was extremely proud of his grandchildren, Garrett and Lucy Claire Moon, Arthur and Matthew Doyle, Isabella and Nicholas Benning, and encouraged them to embrace his love of life and pursuit of education. There will be no service at this time due to the pandemic. The family will host a celebration of Harold’s life at a later date when the world is a safer place. In lieu of flowers, donations may be made to the W. Harold Moon Scholarship Fund via the Augusta University Foundation, 1120 15th Street, AD-1104, Augusta, GA 30912 (Fund 394001). Thomas Poteet & Son Funeral Directors, 214 Davis Rd., Augusta, GA 30907 (706) 364-8484. Please sign the guestbook at www.thomaspoteet.com

The family of William Harold Moon created this Life Tributes page to make it easy to share your memories.

Send flowers to the Moon family.