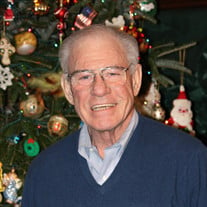 Augusta, GA – Dr. William Darrell Tumlin, beloved husband of Nancy Jarrell Tumlin, went home to be with his Lord and savior Jesus Christ on January 5, 2021. He passed peacefully, surrounded by his loving wife, daughters and grandchildren. He was 80 years old when he entered into Heaven. Bill was born in 1940 in Rome, Georgia. He was the son of the late William Clower Tumlin and Jessie Lumpkin Tumlin. He was one of six children. He attended Rome High School where he was elected vice president of his class and voted “most likely to succeed.” He worked hard, paying his own way through 8 years of college. Bill graduated from Shorter College in 1963 with a degree in chemistry. He earned his medical degree from the Medical College of Georgia (MCG) in 1967. While attending MCG, he met the love of his life, Nancy. They married on December 27, 1966. God went on to bless Bill and Nancy with 3 beautiful daughters. In 1968, he completed his residency at the Macon Hospital while also serving his beloved country in the U.S. Army. Before Bill was deployed to serve in Vietnam, he learned of a retiring physician’s practice in Oglethorpe County. Knowing the need for a doctor in such a large rural county, General Throckmorton granted Bill exemption from service. Shortly after, Bill acquired his family practice, the Crawford Lexington Medical Center. He poured his heart into his practice where he was affectionally known as “Doc.” He retired from family medicine after 46 devoted years. He was a friend of Bill W.’s for 43 years, in which he compassionately passed on the message of hope to those suffering from addiction. In 1987, he became certified by the American Society of Addiction Medicine and began treating patients. Shortly after, he established the Commencement Center at Athens General Hospital, as well as the Cobb House. In 2014, he founded Apex Assisted Recovery of Athens. In 2019, Bill envisioned and brought to life 24th Street, Inc., the “Club”, a nonprofit organization where Alcoholics Anonymous and Al-Anon member could gather safely and anonymously. Bill dedicated his life to serving others. He glorified Jesus Christ by passionately sharing how he found his faith. As a testament of his faith, you would often hear him asking others “Whose child are you?!” and “Who’s got this?!” Bill was known for his deep sense of serenity and confidence in his eternal home. In his earlier days he loved to go fishing, play tennis and go flying. His best friend, Jim H. taught him how to fly and he later earned his pilot’s license. In his later days he loved tending to his roses, reading, and most especially writing poetry to his precious Nancy. He also cherished his daily quiet time with Jesus. Though Bill no longer walks on Earth, he is alive and well with the Lord. He is survived by his wife of 54 years Nancy Jarrell Tumlin, three daughters, Lisa Tumlin Rhodes (John), Katie Tumlin Kirkpatrick (Steve), Holly Tumlin Phelan (Scott); his six grandchildren, John Parker Rhodes Jr., Sadie Nannette Rhodes, Melissa Katherine Rhodes, Lyla Katherine Phelan, Riley William Phelan and Steven Colton Kirkpatrick; his brother, Charles Douglas Tumlin (Patsy), his sister, Joyce Tumlin Adams (Pat) many nieces, nephews and friends whom he loved dearly. He will also be deeply missed by his dog, Theodore Roosevelt Tumlin “Teddy.” Bill was preceded in death by his sister, Carolyn Tumlin Maxwell (Verna) and his two brothers, Donald Richard Tumlin (Inez) and Robert Clifford Tumlin. A graveside service will be held on Saturday, January 9, 2021, at 2:00 PM. at Westover Memorial Park with Rev. Jim Hinzman officiating. The service will be available via zoom.Link: http://bit.ly/3sbLJ5M , Meeting ID: 956 6906 8355, Passcode: 242424 Honorary Pallbearers will be Charles Pair. Pallbearers include Colton Kirkpatrick, Steve Kirkpatrick, Bill Maxwell, Christopher Pair, Riley Phelan, Scott Phelan, John Rhodes, Parker Rhodes. In lieu of flowers, donations can be made to 24th Street Inc. at 24thstreetathens.com (under the tab “The Giving Station”) or sent directly to 24th Street Inc., P.O. Box 49428, Athens, GA 30604. Thomas Poteet & Son Funeral Directors, 214 Davis Rd., Augusta, GA 30907 (706) 364-8484. Please sign the guestbook at www.thomaspoteet.com

The family of William Darrell Tumlin created this Life Tributes page to make it easy to share your memories.

Send flowers to the Tumlin family.