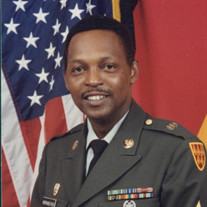 Willie James Merriweather Augusta, GA – Entered into rest on Wednesday, December 9, 2020, Willie James Merriweather, 63, loving husband of Linda Merriweather. Willie James Merriweather, affectionately known to some as Will, Daddy, Uncle BoBo or just plain Bo was born in Aiken, South Carolina on January 29, 1957 to Evelyn Lott Merriweather and Willie Lee Merriweather. Both of his loving parents preceded him in death. Willie graduated from Lucy Craft Laney High School in 1975, and immediately embarked on a career in the military. He loved military tradition and ceremony and served 21 years in the Army retiring with honors in 1996. He enjoyed telling tall tales especially of the time he served in the snow-covered fields of Germany. He was a true soldier at heart. He attended college at Central Texas College and Augusta Technical College. Linda and Willie met while they were both on a tour of duty in Fort Hood, Texas. They were united in holy matrimony on July 4, 1981 and remained together for 39 years. Linda often remarked, “We grew up together.” One child, Jeremie Kristin, was born to this union. The family traveled with the military for several years, finally settling down in Augusta when Jeremie was very young. Willie found God in nature and felt closest to his Savior when he was fishing or enjoying a beautiful sunrise, dramatic sunset, or simply listening to a soft rain on the rooftop. During these times, he is certain to have been communing with God and making plans for his soul salvation. In his later life, he became a member of True Gospel Christian Church Inc. under the capable leadership of Reverend Dr. Brenda L. Duncan. Willie went home to be with God on the morning of December 9, 2020 after fighting a brave battle with throat cancer. On that morning God took him by his right hand and led him away from his physical pain and earthly suffering to a better place. A promise made in Isaiah 41:13 was made manifest that Wednesday morning for Willie. “For I am the Lord, your God, who takes hold of your right hand and says to you, do not fear, I will help you.” And indeed, God helped him to perfect peace. In addition to Linda and Jeremie, Willie is survived by a beautiful granddaughter: London Lynnette Merriweather; a sister: Betty Merriweather; a brother: David; his beloved mother-in-law: Ethel Johnson; a special aunt, Peggy Thomas; several cousins, nieces and nephews. His brothers: George and Ricky; and sister: Bernice are waiting for him at Heaven’s gate. He also leaves five sisters-in-law: Mary Louise, Alfredia, Sandra, Vanessa and Audrey; and a brother-in-law: Ted to treasure his memories. The funeral service will be held Friday, December 18, 2020 at 11:00 A.M. in the chapel of Thomas Poteet & Son with Rev. Dr. Brenda Duncan officiating. Interment will follow in Hillcrest Memorial Gardens. The family will receive friends prior to the service from 10:00 to 11:00 A.M. at Thomas Poteet & Son Funeral Directors, 214 Davis Rd., Augusta, GA 30907 (706) 364-8484. Please sign the guestbook at www.thomaspoteet.com

The family of Willie James Merriweather created this Life Tributes page to make it easy to share your memories.

Augusta, GA – Entered into rest on...

Send flowers to the Merriweather family.